AT&T U-verse wireless receiver: Too good to be true? 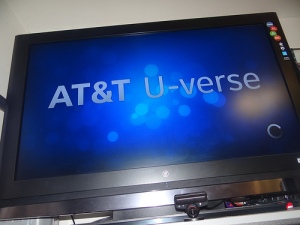 The AT&T U-verse wireless receiver allows the television watcher to seamlessly move their television to a different location, without having to fool around with wires or cables. Lead researchers have declared this a “scientific breakthrough” and have even requested to congress that other areas of research, such as stem cell applications and developing noninvasive cancer therapies, be postponed so that further advancements can be made with the U-verse wireless receiver.

Six year old Carmen Stredmore was one of the first to reap the benefits of this fascinating invention. Sources confirmed that Carmen typically watches Dora the Explorer when she arrives home from school. This past Tuesday, however, her mother was having the room painted in which they keep their television. Due to AT&T’s recent scientific breakthrough, Carmen and her mother were able to move their television 6.5 feet into the next room.

When interviewed about the ordeal, Carmen stated that she was in fact able to watch her television program, which she then proceeded to explain; “Dora saved the Snow Princess and Boots and Swiper kinda got lost but then they didn’t get lost and then a commercial about Raisin Bran came on and then my brother came home and then I had to pee.”

Research does in fact confirm that the Snow Princess was saved and that Boots and Swiper temporarily lost their bearings. In addition, had Carmen not been able to view this episode of Dora the Explorer, she would not have learned how to say “book” (libro) and “water” (agua) in Spanish. Thus, should Carmen ever become lost in a Spanish-speaking country she will be able to obtain water and reading materials. Unfortunately, however, this episode of Dora The Explorer did not cover run-on sentences. It was also reported that Carmen’s mother dislocated her C5-C6 vertebrae from transporting their 58 inch plasma television screen without assistance.